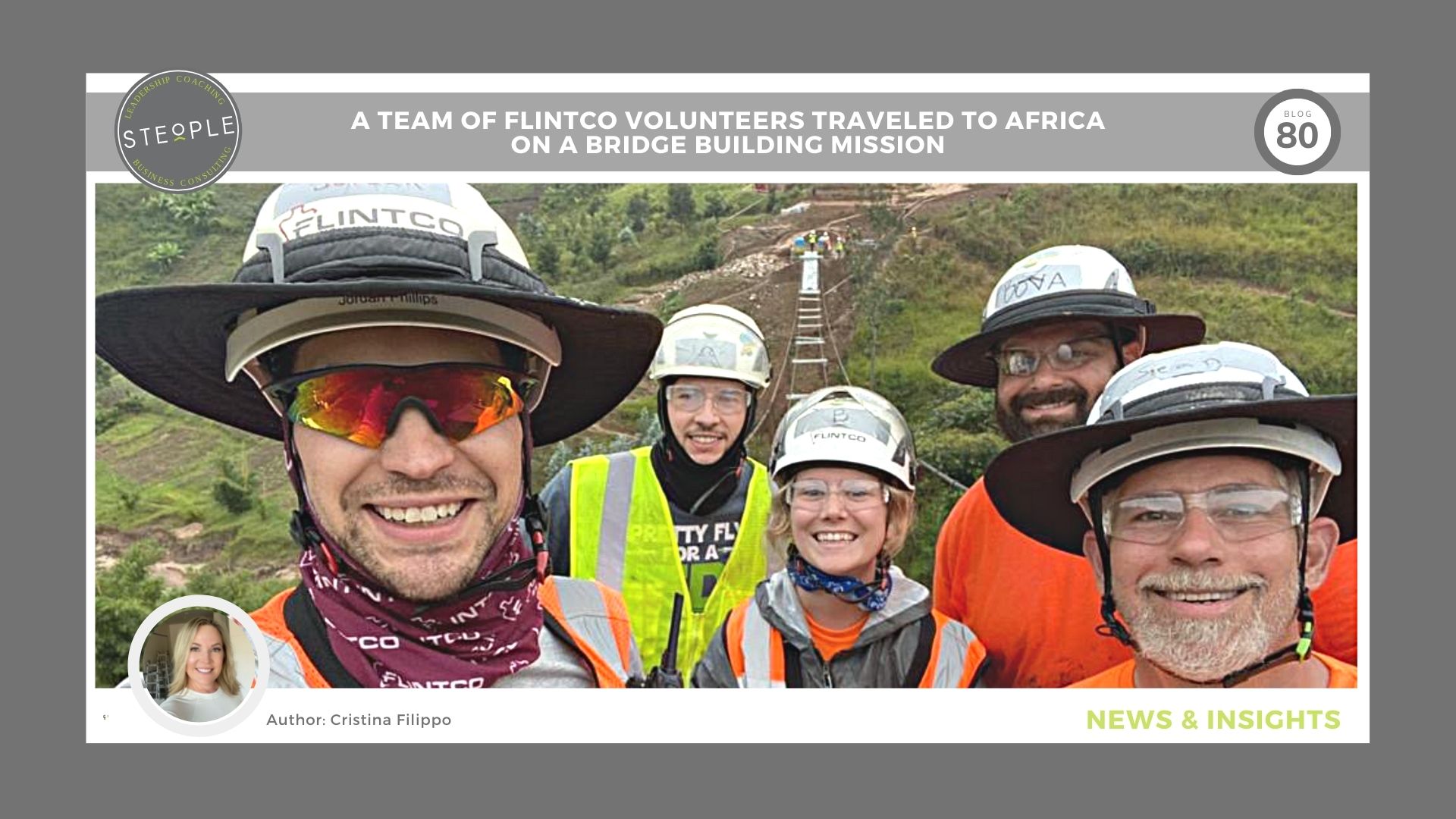 By Cristina Filippo
As Told by Sean Williams, Team Member of Flintco Construction
I opened my eyes slowly as the sun streamed through the cracks of the thin curtains that hung haphazardly over the small window across from my cot.  I moved slowly getting oriented to the new world of Rwanda I had become a part of only a short 18 hours ago.  I could hear the chickens clucking outside under the open window along with the tinkling of laughing children in the distance.  It had been a long 36 hours of travel when we finally arrived yesterday afternoon.

Our Journey In
As I lay there I reflected on how this amazing adventure had come to be.   After our leadership had been introduced to Bridges to Prosperity at a construction industry event, they realized the tie our core values had to their mission, so the decision was made to join in their efforts to build much-needed bridges. The call went out and we had responded, knowing that we could make a big difference in another part of the world. The last few months had been filled with planning meetings, getting various immunizations, gathering donations, and purchasing construction tools and safety gear.  We had just kissed our families goodbye and traveled halfway around the world.  Touching down yesterday in a land where none of us knew the language or how to navigate foreign kiosks and signs was definitely eye-opening!  But as we exited the airport with all of our luggage, tools, and safety gear we were warmly greeted by our driver, Bati, who was transporting our team to the hotel for the night.  With 10 of us and our staff, we somehow squeezed all of us and our gear into Bati’s for a midnight trip through Kigali.  The rest of the evening/night was a blur, as I don’t remember checking into our hotel.  I awoke still tired from the days of travel to find breakfast waiting for us and praying that there would be coffee.  The coffee did not disappoint nor did the breakfast of Shakshuka with freshly made bread.  As our team trickled in for breakfast;  our drivers, who would be helping get to a from the site every day, arrived in two old green Land Cruisers.  As we talked logistics with our drivers, the first priority would be getting to the local market to stock up on food before venturing out to the remote village.  Upon arrival at the local market, with our driver’s assistance, we divided and conquered our list to load up the 10 grocery carts…enough to last the entire two weeks we were here.

It had been a slow 4-hour trek out to the village. As we rolled along, the roads were in pretty good shape for the most part and we had very few cars that passed us.  As we bumped along the driver informed us that Rwanda is called “The land of 10,000 hills” for a reason.  There is not a flat piece of land anywhere in the country… there are hills, there are twists, and there are turns. The country was just gorgeous.  I leaned my forehead on the window just watching the countryside go by simply soaking up the sun.  At that exact moment, our Land Cruiser made a sharp left turn and dropped down into this dirt road.  That’s when things changed, and reality hit.  There had been recent rain and so the rivers were overflowing and a huge body of water was running wild right beside us.  I peered out seeing our tires were barely skimming the edge of the river.  We began the steep climb up on a very rutted dirt road. In the back, we could hear our groceries jostling around and we quickly grabbed onto the “sissy bars” to stay put.  After some time, we came to a clearing with the village spread before us.  We soon began to see what village life is really like…there were village people everywhere hard at work on their daily tasks. We saw women carrying water jugs, men tending to livestock, and children on what looked like recess playing an unfamiliar game.  I was entranced by this whole different way of living day by day with no electricity and being, for the most part, off the grid.

The village of 1,000 people was waiting for us as we squeezed the Land Cruisers through the 12 feet wide entrance into the village. We saw heads pop out from all the thatched roof home doors and windows. They were wide-eyed and looked to be asking what was going on.  Immediately what seemed like the whole village was surrounding us and we carefully stepped out of the vehicle realizing we couldn’t actually communicate due to the language barrier so busily tried to get our gear out as our driver translated what was going on.  The thing I’ll always remember about that moment is the curiosity and wonder each of these groups had about each other.  We knew we were embarking on something both strange and wonderful.  They bustled us through to the 400 square feet home with our gear, clothes, and food. It was tight accommodations. And so we were here!  Exhausted and excited at the same time.  Sleep came fast and this morning I woke to a feeling of wonder that we made it this far. Today we would make our way to the site where we would build a bridge that would so positively impact this village.

Teamwork Made the Dream Work
Everyone in the house is starting to stir and after a quick breakfast, we load up our gear.  None of us know what is ahead of us, but we all have that feeling of intense anticipation.  Although we all work for the same company, before this trip we didn’t know each other at all.  But, we understand (and this falls back on our ethos) why we were here and why we were chosen.  That is our motivation. And the one thing we also know as a Flintco team is that we’re not going to fail.  We are outside our comfort zones, but we are going to make this happen.

What we weren’t aware of was how much we would bond over this experience.  We had little contact with the outside world.  We all worked seamlessly together over the coming two weeks, living our core values, and gaining confidence in our roles and abilities.  Every day we would debrief what went well or didn’t go well.  We laughed and cried together.  We would stay ahead of schedule and begin to integrate into the community.  As the day progressed, the village people would come to rely on us and us on them.

The Village Culture
I will never forget the people of the village. The atrocities that happened in this beautiful country in the 90s hung like a cloud over all of us throughout the trip.  Initially, I noticed they were nervous and a little bit hesitant with us – they honestly didn’t think we were real at first.  But, that first day, as we were all standing on the edge of the hillside talking about the day’s logistics and doing our safety kickoff… we consciously integrated ourselves within the community. We just went and just spread out. There were some strange stares… like what are you guys doing? Why are you standing beside me?  And the crazy thing is, it wasn’t anything we had talked about doing before it happened it was totally intuitive!

Our first day on the ground was awkward. Initially, we used a lot of nodding and very little speaking. As an entire group, we immediately got into a great rhythm.  I noticed early on that the villagers would look over and see that we were working hard and doing good kinds of things.  This definitely helped with the trust!  By the second day, they knew we were in it until the end…we were all in to help them.  We got to know them and what their names were, who their family was, were able to say simple words like hello, and started to learn more of the language. They learned a little English and we learned a little Rwanda!  We were part of beautiful ceremonies, played their sports, and ate the meals they offered. By the end we had friends.

The Bridge is Built!
As for the noble purpose of why we were here – it was all about saving lives by building the Bridge. We listened to story after story about the loss of about 10 people a year trying to cross this bridge. They basically had only a log to cross this river. The new bridge ended up being 90 meters…It’s basically the length of a football field.  Imagine walking down an incredibly steep hill for half a mile to get down to the log and shimmying across to see family members, getting medical care, fetching food and water…all that is solved now with a beautiful bridge!

Upon completion of the bridge, there was an amazing celebration.  There was singing to bless this monumental accomplishment. It was incredibly powerful.  They had the tribal members, leaders in the community, and everyone that helped speak about the bridge.  They spoke of the importance to the community and everyone who was there took an initial walk over the bridge to christen it. What those 100+ people walking across the bridge meant was that it was safe to use, and everyone was meant to celebrate.  The singing, the dancing, and the gratitude expressed by this beautiful group of people… were inspiring.

Cristina’s Take
What an incredible story of a newly established team (Flintco, Bridges to Prosperity, and the Rwandan people) working so well together!  Can you think of a time when you worked on a team that seemed to flow effortlessly?  Reflecting on it, humanity’s greatest accomplishments have resulted from team efforts. No one is an island; people everywhere survive and thrive by pulling together. Ironically, however, organizations are finding it harder, not easier, to build successful teams. Numerous studies show that only 20% of teams are considered high performing.  This is especially true in fast-paced 24/7 global teams that are constantly switching across functions.

What we see so much of the time in our work with teams is that there is a “Professional Culture Clash”.  Different areas in an enterprise tend to approach a common project or initiative very differently as it relates to jargon, timelines, and approach to the work.  Sometimes this might be due to different skill sets and personalities that, if channeled effectively, might result in diversity in thinking…which is positive! However, so much of the time there is actually a “Scarcity Mindset” which is where people on the team feel as though they are competitors on the same team…which is not a positive! So, what made this Flintco team so successful?  I believe so much of it had to do with two things:  Alignment around core values and evidence of psychological safety.

If the answer to both of those final questions above was “Not Sure” or “No,” then I encourage you, dear readers, to immerse yourself in the literature of Simon Sinek or Amy Edmondson’s work.  These two gifted researchers and authors will take you a long way on the journey of embedding these two important realities in your team culture.  As always, at Steople. we are here as well to talk through any questions you have in building the type of team Flintco lead in Rwanda. Have a great rest of your week!