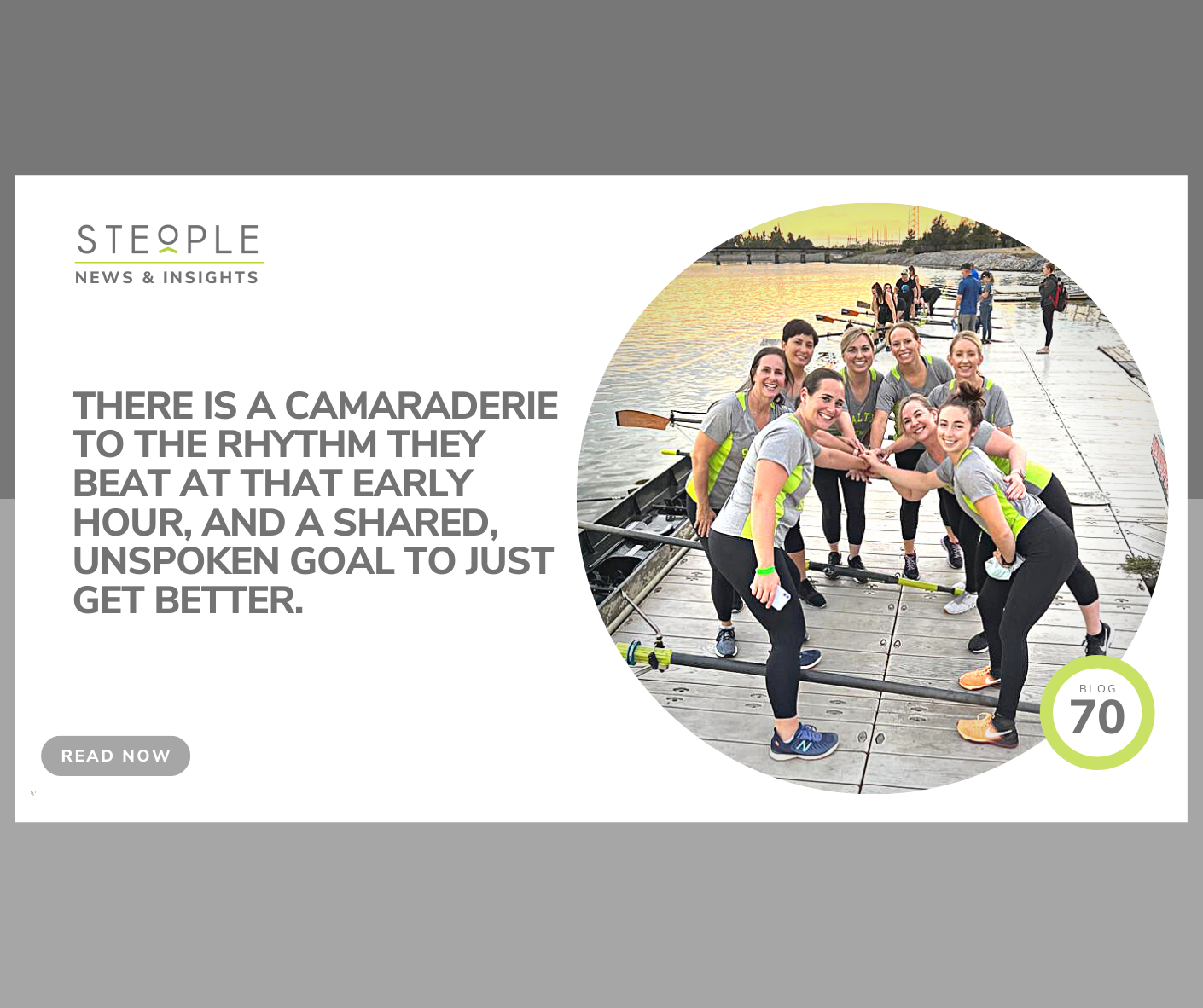 Oars beat a steady rhythm against the water. Eight women pour all of their energy into this repetitive motion while one sits at the stern, coaching them through it, as much of the world around them is still sound asleep. There is a camaraderie to the rhythm they beat at that early hour, and a shared, unspoken goal to just get better.  As the sun comes up, the boat crew takes the beauty in…

Have you ever had something you wanted to do?  Something that was on your bucket list?  You knew eventually it would happen…the only question was when?  Happy to report it happened for me recently…competing in a regatta!  Early mornings, carpooling to the Olympic training facility, carrying our 250-pound boat to the dock, and, finally, the payoff…hearing my oar splash into the water and feather across in time with my row crew. It was tough work.  Did you know rowing utilizes 85% of your body?  In fact, physiologists claim that rowing a 2,000-meter race (1.25 miles) is equal to playing two back-to-back basketball games.  But, as with many things in life, it wasn’t about the physical work, it was the mental discipline that made the difference each time we pushed off that dock.

How Did Rowing Come to Be?
What started as a method of transport and warfare in ancient Greece, Rome, and Egypt, has since turned into one of America’s oldest, favorite sports.  Rowing in its modern form developed in England in the 1700s.  Rowing as the sport really grew and developed from the 1830s to the ’60s in Australia and Canada and during the same period became popular throughout Europe and in the United States. It is a time-honored tradition that, historically, has the most traction in the eastern United States.  The Harvard-Yale Regatta is the oldest intercollegiate sporting event in the United States having been contested every year since 1852.  But, over the years, the popularity has grown even into landlocked states.  Today, there are an estimated 11 million rowers!

Psychological Challenges for Crew Members
In rowing, no member is the star of the team. The rowers and the coxswain (verbally commands the crew and steers the boat) have to exhibit a perfectly synchronized flow of collective muscles and efforts: the focus is on the goal of propelling the boat through the water with the machine-like movement of the oars.  They must perform as a crew, with each adapting to the strengths and shortcomings of the other. The long-armed member must adjust to the stronger back of another member. Each needs to suppress their individual egos for the sake of the whole. Each must empathize with the other’s point of view, figuring out what is needed, and quickly adjust. Each has to open their heart to every other member and be willing to get past their own feelings of ego or frustration. Each has to give themselves up for the entire crew’s effort, rowing as the extension of the teammate, in front and behind. To do this requires humility and selflessness.  Unlike other sports so popular today, this is truly a team sport that requires either all to be successful or no one is successful.  Experts estimate any other sport you participate in is 70% mental…for race day in rowing, it is 95%!

Leadership Lessons
As a member of the crew, it did not escape me how many of the things I learned about rowing is so easily analogous to leadership.  Here is some of what I am talking about:

1. You Can’t Control the Boat Alone.  One of the biggest issues a young crew encounters in the boat is balance and stability.  Being able to feel some of the small adjustments each team member needs to make with their body and their oar is key to success.  One morning as we were putting up our oars in the boathouse I asked Ruthie, our only experienced rower, what I needed to do to balance the boat in seat 7.  She said, “Cristina, you can’t control the whole boat! The team has to do the work!”  My Achilles heel is that I believe I can make anything happen if I try hard enough.  All my teammates burst out laughing because they know me too well

2. Sometimes You Must Overcome a Poor Leader.  The two positions on the team that are “external”, but have so much power are the coach and the coxswain.  A coxswain is, typically, a small woman (lightest weight possible) seated at the stern directing the crew.  She is the leader in so many ways.  On our 3rd morning of practice, we were introduced to our coxswain…let’s call her Doris.  She lasted one practice because it was obvious, due to her temper, she was not going to be effective in leading this group of high-achieving women.  Who did we end up with?  An 18-year old, female rowing phenom, soon to be a student at Stanford.  Huge difference in leadership composure and a huge difference in leadership.

3. You Might “Catch Crabs” and Need Help.  Towards the end of our practice sessions, some members of the crew ran into a typical issue for rowers…”catching crabs” (look it up).  When this happens the only way for a rower to not be ejected from the boat is to anticipate it could happen, remain focused, and have the rower behind you help get control of the oar.  From what I understand, this danger isn’t about IF it happens to you, it is WHEN will it happen.  Without you and your crewmate responding well together, under pressure, it is almost impossible to overcome.

4. Lack of Communication is Debilitating.  Communication is key to success on any team.  Picture being out on a river, sitting on a 62-foot racing shell, then throw in weather conditions and lots of distractions.  Now picture having to shout orders to eight women while making split-second decisions. The way the coxswain communicates out is through a “cox box” and in many of our practices it was cutting out.  Where I sat near the coxswain everything was clear, but the further down the line from the leader the more muddled the orders were and the more confused the team became.  The result was a lack of clarity in the direction of the row that in the end defeated us.

5. The Team Must Rely on the Wisdom of the Leader. Sitting at the finish position and getting ready to push off the dock, as a rower you have your back to the bow which means you see nothing as you are flying through the water in your lane. You have to rely on all of your senses as to whether everything is in sync and truly listen.  And you can’t see where you are going or where the finish line is…only your leader, the coxswain, has that vantage point.  You have to trust that even though you can’t see the big picture, the coxswain can and they always have the best interest of the boat in mind.  A lot of trust is needed there!

6. You Have to Be Selfless Teammate.  Many factors go into true success: hard work, determination, focusing on your goals, assistance from others, learning from your mistakes. Being able to get the fundamentals down and truly become more relaxed in your position takes time.  At one practice I was asked to switch seats, which is a big deal for a newbie.  At first, I resisted until one of my teammates muttered the magic words “for the good of the team”.  Whew…that hit home.  So I did it and hated it.  Then I was asked two weeks later to move again to seat 7 and it was easier being selfless and “taking one for the team” this time!

7. Being Nervous on Race Day Means You Give a Damn.  So what happened on the day of the race?  All of us woke up feeling very unsettled.  We knew we had not had enough time on the water to show up well.  Years ago, I went to the Jay Leno Show and he had Tony Bennett on the show.  Tony said that for years, as a singer, he dealt with debilitating stage fright.  He was complaining to Frank Sinatra about it before a big show and Frank said “You are anxious because you give a damn!”  Since then I have always used that as fuel to feed performance.

8. At Times You Must Redefine a Win.  So race time arrived and as we gathered on the dock we set our intentions for the race.  If you would have asked us at the start of the season we would have said in order for us to feel successful we needed to win.  But, at race time we needed to be realistic. We wanted to stay in our lane. We wanted to have the best run we had ever had.  We wanted to keep everyone in the boat.  We wanted to be competitive.  Re-setting expectations isn’t a defeat, it is needed to be able to sustain productivity and continue to motivate the team.

In the end, we finished 3rd.  We jumped out of the boat, high-fived one another, and felt that we had accomplished what we had set out to do this first season of rowing.  We popped open a beer, toasted one another, sat in the grass watching the other crew races, and waited for the medal ceremony. We had done it! Even though we were not on the winning boat, in the end, we were still winners as a member of this team. The endless hours and miles put in on the water, the discipline needed to focus, the ability to be a team player, and pushing each other as a team for those small wins along the way are what we realize really counted.