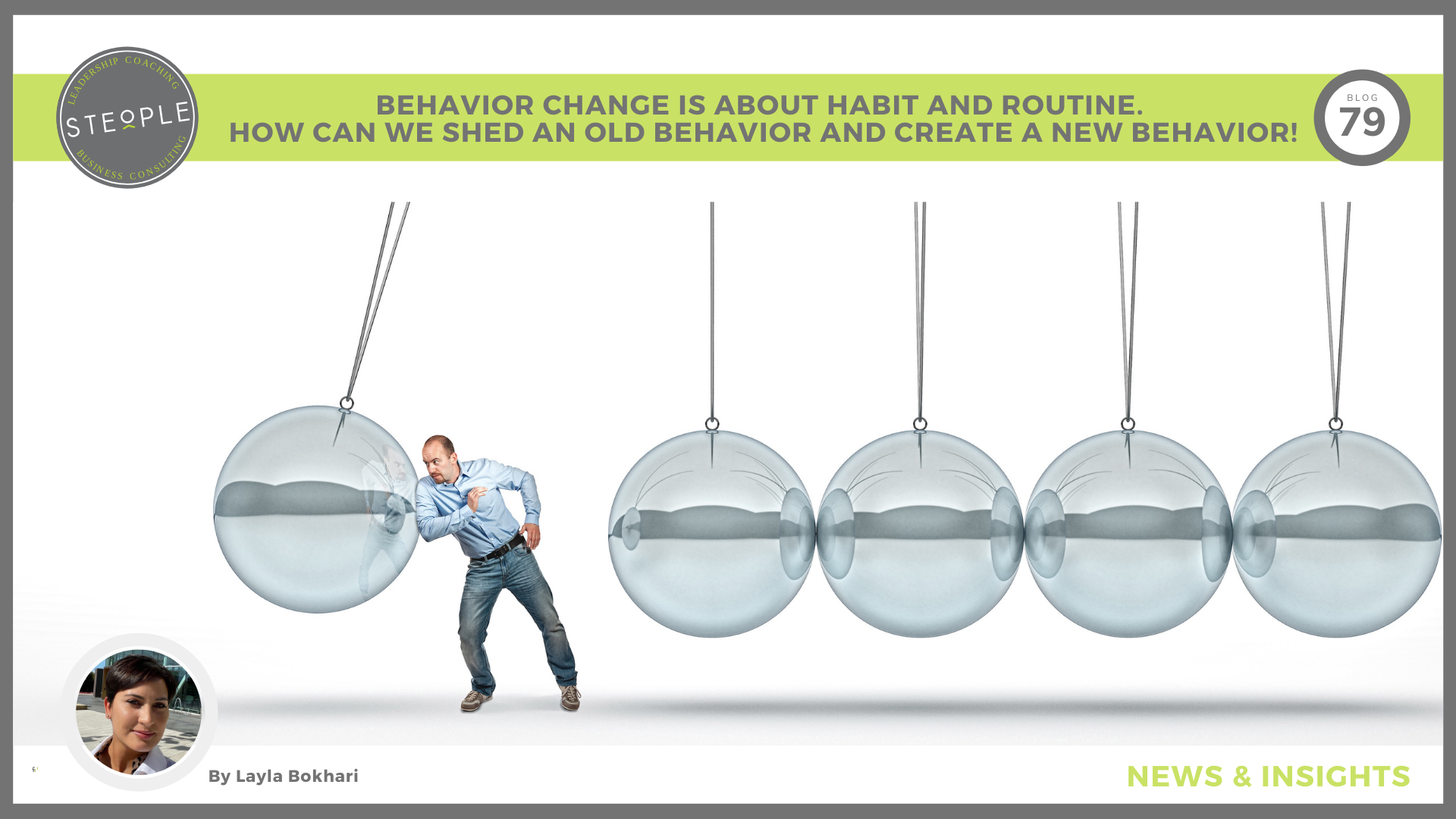 The Impact Of Small Changes In Behavior

By Layla Bokhari
Have you made new years’ resolutions before that did not stick? I have. I vowed to change my behavior with dieting, exercise, getting outdoors more etc. etc. Why can’t we acknowledge the behavior that we want to change and just change it? Well, it’s not that easy and we tend to bite off more than we can chew with a long list of ambitious items we want to work on. I learned long ago, that if you focus on too many things to change at once, it does not have as big an impact than if you focus on one thing in behavior that will make a huge difference. We are talking small tweaks here and there.

I remember being on the receiving end of my first 360 degree feedback about 10 years ago and I had to contain myself as I was being debriefed on the results. Needless to say the results were not great! I had a lot to work on as a leader. My coach took me through the process of focusing on one thing at a time, and now 10 years later the 360 feedback was a lot better. Behavior change is about habit and routine. How can we shed an old behavior and create a new behavior!

As facilitator of the 2-year leadership development program that I am currently running, the cohort of high performing leaders are working on their one big improvement goal that will make a big difference in their leadership and bring them to the next level as leaders. As I started working with one of my clients a few months before, we debriefed her 360 feedback results. There was nothing surprising in the results, it was just now amplified in black and white from a number of evaluators. We narrowed it down to 3 things to work on. From there we prioritized and only focused on delegating and setting boundaries for herself. As we talked through where the behavior came from, she uncovered that it was deeply engrained in her at an early age to help everyone in her family and always be busy. This was an aha moment for her. Just acknowledging where this behavior was stemming from made a huge difference in shifting her mindset to shedding her old behavior. We then talked through the WHY. Why did she feel she needed to take on all the work and say yes to all the projects and tasks. Once we thought about the behavior that she was currently portraying, we talked through the new desired behavior, which was to set her boundaries (to be able to say no without feeling bad), and delegating to others on her team. From there we discussed what would make her feel “safe” to delegate to others and set boundaries. For her, she wanted to know that the work quality would be excellent like her own work. So she decided to create time for a morning team huddle to track progress and establish space for 1:1 check-ins with team members. Once we talked through where the habit stemmed from, what assumptions she had about the work or task, then she started to test her assumptions. For this part, we decided to use a text message to remind her of her habits. The commitment on the reminder went something like this: “When I come into the office each morning, instead of working on my tasks right away, I will prioritize what only I can work on and delegate other tasks to my direct reports”. We set the reminder for every morning. She received a text at 8:00am as she walked into the office of this reminder for 28 days. I can proudly say that after 6 months of coaching and consistently working on this behavior change just making little adjustments and tweaks along the way, the new behavior and habit is starting to solidify in her daily routine.
What is your new desired habit and how will making that behavior change impact your leadership for the better?